Warning signs of Dementia. Financial Problems Can Be Sign of Dementia 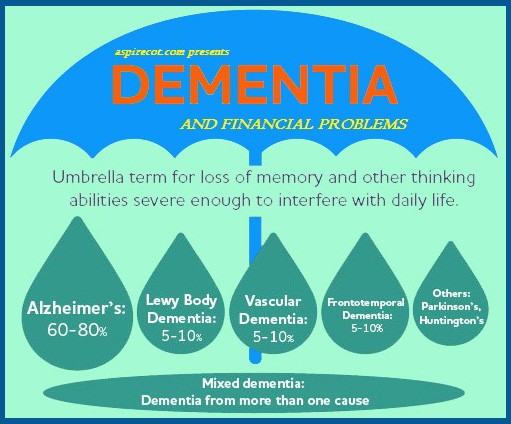 New research shows that financial difficulties may be a symptom of Dementia in the early stages. Alzheimer’s disease or a comparable disorder was discovered in the early stages of some older people with memory issues. Dementia alters the brain in such a way that ordinary activities become difficult. Dementia is a general word for the inability to think, lose memory, pay attention, or use logic. Severe mood swings might impair social or professional functioning. A wide range of factors can cause Dementia. In some cases, advisors are prohibited from discussing individual cases openly due to confidentiality agreements.) The process of acquiring authorization is not always simple, but getting the legal right to intervene in someone’s expenditures through the courts is much more complex.

In contrast to the expected consequences of biological aging, Dementia is a syndrome, usually chronic or progressive, that leads to a decline in cognitive function (i.e., the ability to process thought). There are numerous ways in which it can impair one’s ability to learn and retain information. There is no alteration to one’s state of mind. Mood, emotional control, behavior, and motivational changes are frequently present in conjunction with and sometimes precede the decline in cognitive function. Alzheimer’s disease and stroke are just two examples of diseases and injuries that can cause Dementia. For older individuals worldwide, Dementia is the seventh-largest cause of death and a significant source of impairment and dependency. Memory loss has a wide range of effects on people’s physical, psychological, social, and economic well-being, as well as those who care for them. Dementia is often misunderstood, leading to stigma and obstacles to diagnosis and treatment. Dementia is not a specific disease but is a broad term for the impaired ability to remember, think, and make decisions that interfere with everyday activities. Alzheimer’s disease is the most common type of dementia. Though dementia mostly affects older individuals, it is not a part of normal aging.

“Early signs of Dementia vary, but some common ones are trouble recalling recent events, especially those familiar to individuals.” 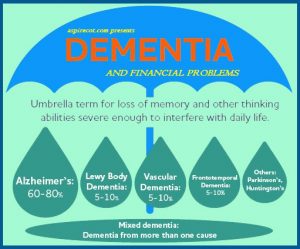 According to a study published in JAMA Internal Medicine, financial difficulties may be a warning sign of Alzheimer’s disease and other dementias. Dementia’s early symptoms can be challenging to detect since they are so subtle. Early signs and symptoms might also be highly variable. However, it is common for people to initially recognize that their memory fails them, particularly when recalling recent events.

Memory loss that has an impact on daily activities

Occasionally forgetting appointments or a friend’s phone number is entirely natural, and it happens to everyone.

Nevertheless, a person who has Dementia may have difficulties locating a familiar location or maybe perplexed where they are.

Those who have Dementia are more likely to have difficulty finding the right word or substituting inappropriate words, which makes understanding sentences more difficult.

A person with dementia may have difficulty understanding what the numbers represent when it comes to managing finances.

Having issues with misplacing items

A wallet or set of keys can become missing for any number of reasons. Dementia patients are prone to misplacing objects.

A  lack of drive

Some activities will wear individuals out, and that is perfectly normal. Dementia, on the other hand, might lead someone to lose interest in the hobbies they formerly enjoyed. Dementia’s early symptoms can be challenging to detect since they are so subtle. Early signs and symptoms might also be highly variable. However, it is common for people to initially recognize that their memory fails them, particularly when recalling recent events.

Memory loss that has an impact on daily activities

Occasionally forgetting appointments or a friend’s phone number is entirely natural, and it happens to everyone. Dementia might make it easier for a person to forget and lose track of things. Have trouble with routine chores that individuals have done before.

Symptoms and signs of Dementia

As a result of the variety of underlying causes, health issues, and pre-existing cognitive abilities, everyone with Dementia is affected differently. There are three steps to understanding dementia symptoms and indicators.

Dementia’s early stages are typically ignored due to the disease’s slow onset. Typical signs and symptoms include: forgetfulness getting lost in familiar areas and forgetting how long it has been since the individual last visited. Everyone experiences periods of sadness or depression. Dementia patients are prone to uncontrollable mood swings. They may become disoriented, suspicious, or socially awkward as a result of this.

At this stage, signs, and symptoms become more apparent and may include: forgetting current events and names of persons at home getting disoriented with increased communication difficulties requiring assistance with personal care displaying altered behavior, including wandering and repetitive questioning

Dementia in its late stages is characterized by near-total reliance and inaction. Physical symptoms and indicators become increasingly prominent as memory loss progresses and may include: A  loss of awareness of space and time, finding it challenging to recognize family members and acquaintances who are becoming more dependent on help with daily activities, unable to walk, or exhibiting altered behavior that could escalate to include aggressive behavior

It was found that 81,364 Medicare enrollees in single-person households had health and financial information evaluated by Lauren Hersch Nicholas of the Johns Hopkins Bloomberg School of Public Health and her colleagues. Up to six years before being diagnosed, those with Dementia were more likely to have fallen behind on their bills. It took them an average of two and a half years longer to get out of debt after diagnosis.”Nicholas, health economist and study’s primary author, adds, “We were hearing many anecdotes of patients who did not even know that they had dementia when some of these detrimental financial events were happening.” A fresh fraudster could be added to other accounts and start stealing people’s savings if they lose their home or business. We wanted to see if this was a common occurrence or just a few odd occurrences reported in the media.”

Accountants and financial advisors can assist

It is impossible to trace someone’s finances without their agreement when diagnosing Dementia through financial transactions, which presents a dilemma when using that method. Some professionals can help if the individual is worried about someone else’s bad financial decisions. They have a keen eye for potential problems and can often predict them. In many cases, clients would phone and complain that they were forgetful or asked the same question repeatedly, according to Jack Scaff, a financial advisor and principal of Brouwer & Janachowski in Mill Valley, Calif., After an extended period, we finally realized there was a problem. Occasionally, the obviousness of something is all that is required.”

Additionally, persons who are already suffering from Dementia may begin to repeat themselves or, worse, become involved with scammers. Even if they suspect elder abuse or fraud, financial guardians should try to acquire permission from the person they care for to speak to their adviser or accountant and get a feel of how they are behaving, adds Scaff.

It is estimated that over 5 million Americans, the majority of whom are 65 or older, suffer from Dementia due to Alzheimer’s disease or other associated illnesses. As the population grows older, this number is likely to rise. Alzheimer’s disease, often known as Dementia, is characterized by a decline in cognitive abilities such as thinking, remembering, and reasoning, which can cause problems in daily tasks. Seniors with cognitive impairment are more vulnerable to financial exploitation, including fraud, according to the research. A person’s ability to manage payments and other finances may be harmed even if they have moderate cognitive impairments. However, it is unclear how pervasive these issues are. More than 80,000 persons over the age of 65 were studied by a team led by Johns Hopkins University’s Dr. Lauren Nicholas. The participants were all single and on Medicare.

Dementia patients had a higher risk of having their credit score fall into the subprime category two and a half years before diagnosis. Education has been linked to a reduced risk of Dementia. Therefore the researchers looked at persons in high and low education locations to see how they fared. They discovered that those in low-education areas had a greater chance of financial dementia complications and had symptoms for a more extended period before being diagnosed. For example, in locations with lower educational levels, the influence of cognitive impairment on payment delinquency rates began roughly seven years before diagnosis. As an example, no financial issues were associated with arthritis, glaucoma, or hip fracture diagnoses. As a result, the findings of Dementia are not indicative of how people’s health evolves as they get older. There are no medications available to reduce or stop Dementia’s progression at this time. Preventing early cognitive deterioration by getting a diagnosis early may help people save money in the future. Our work is the first time that the medical cliché that individuals should check individual bank account for Dementia is supported by large-scale quantitative evidence,” Nicholas explains. To safeguard the financial well-being of patients and their families, earlier screening and identification, as well as knowledge about the danger of irreversible financial events like foreclosure and repossession, are critical.”

What to Look for-

If Individuals are Suffering from Financial Concerns?

Alzheimer’s disease and Dementia both affect the brain’s cognitive functions. There might be a wide range of symptoms as nerve cells and synapses in the brain degenerate randomly. Memory loss can be subtle and unnoticed in ordinary daily activities such as getting dressed or going to the bathroom. Impaired cognition may be more evident with more strenuous activities, such as managing money. When organizing invoices and payments, balancing bank statements, or making insurance and investment selections becomes difficult and necessitates numerous steps, it may be an early sign of Dementia or Alzheimer’s disease.

Alzheimer’s disease has no known cure, but therapies and activities that engage the senses may help with behavior and mood, including decreased agitation. While engaging in arts and crafts, singing, or listening to music, individuals may be able to relive experiences from the past. After a dementia diagnosis, the average lifespan is estimated to be ten years. However, this varies significantly amongst individuals, with some surviving for upwards of twenty years. As a result, it is critical to avoid obsessing over numbers and make the most of the time individuals have left. There is no “cure” for Dementia at this time. A variety of disorders can cause dementia; thus, finding a single solution is improbable. Alzheimer’s disease, frontotemporal Dementia, and Dementia with Lewy bodies are all targets of research aimed at finding a cure. According to other research, cognitive impairment can lead to overconfidence in one’s talents, which can lead to financial troubles and fraud vulnerability. According to the study, even without effective treatments or cures, earlier identification may be helpful if undiagnosed Dementia leads to costly financial blunders.

Data from Medicare claims and credit reports from the Federal Reserve Bank of New York/Equifax Consumer Credit Panel were used in the study, published on Nov. 31. Payment delinquency – paying a bill 30 days or more late — and deteriorating credit ratings were signs of bad credit. Credit scores below 620 are considered high-risk in the subprime category, indicating a greater likelihood of default than those over 620. One-person households in the second quarter of 2018 (or the year of their death) include persons born before 1947 and lived alone.


Any questions related to Warning signs of Dementia. Financial Problems Can Be Sign of Dementia?